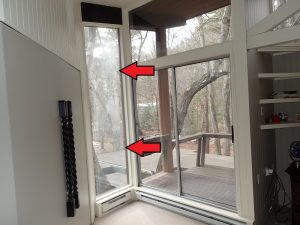 ajority of homes I encounter in a home inspection have at least some thermal pane windows.  The most common thermal pane window has two pieces of glass separated by a spacer.  Sometimes the void between the glass panes is simply a vacuum and other times it is filled with an inert gas such as argon.  The purpose of the gas is to increase the resistance to movement of heat through the glass, or to increase the window’s thermal efficiency.

You would have a difficult time observing it with your naked eye, but the glass actually bulges out slightly as the sun heats up the space the glass panes.  When the window cools down the volume of air inside the glass decreases and the glass returns to its normal position.  This constant expansion and contraction of the glass caused by the sun is called solar pumping. 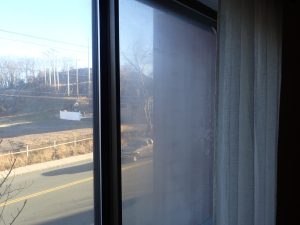 Solar pumping puts a strain on the seals around the perimeter of the glass.  Eventually a tiny seal failure occurs.  When that happens molecules of air or inert gas are forced out of the space as the sun heats up the window, and outside air gets sucked back in as the window cools.  With the entry of outside air into the space also comes the introduction of water vapor or moisture.

Every manufacturer knows that eventually the thermal seals on their windows will fail.  As a precautionary measure almost all window companies install some form of dessicant in their glazing products.  This material adsorbs (not absorbs) water molecules to prevent condensation between the glass.

Eventually the dessicant material becomes saturated.  That means it can no longer take on any more water molecules.  The solar pumping continues, so the water vapor stays suspended in the air until a sufficient temperature differential occurs between the interior and exterior of the home.  That’s when condensation occurs inside the window.

As a home inspector I’m always on the lookout for signs of moisture in between the panes of a thermal pane window.  Sometimes it’s barely perceptible, other times it pretty obvious.  In the advanced stages of thermal seal failure, the dessicant starts to dissolve and gets deposited on the inside of the glass.  Window professionals refer to this as “silica haze.”  If your windows still look dirty after you’ve spent a whole day cleaning them inside and out, look closely.  You might just have thermal seal failure.